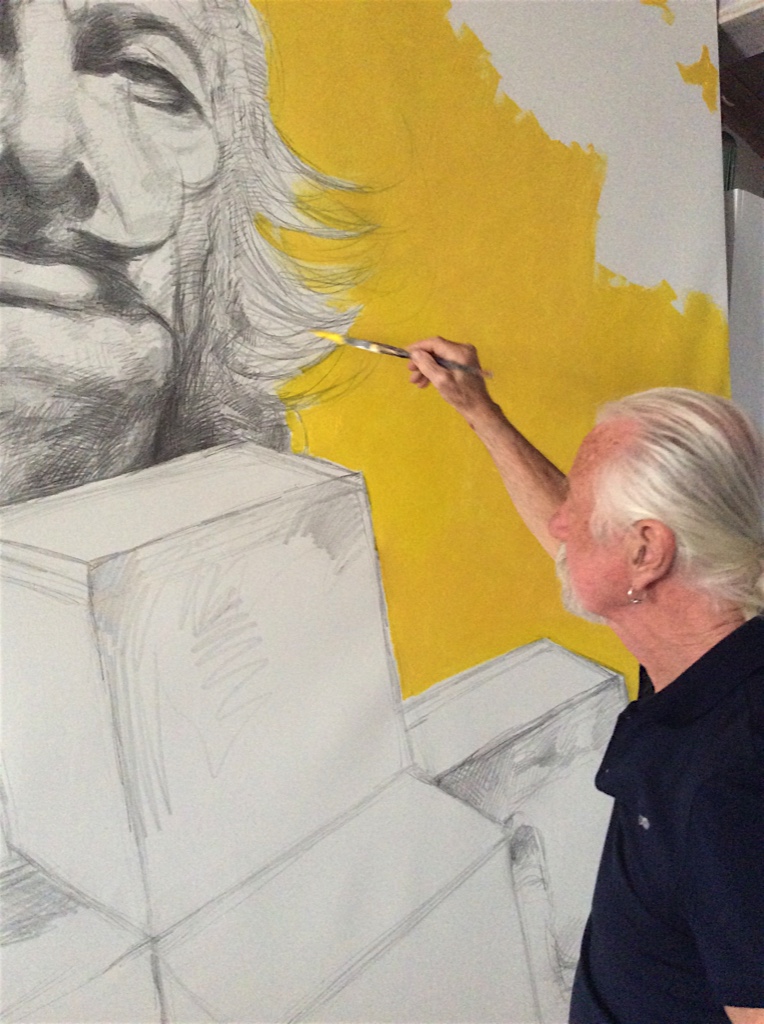 Over the years Paul Ygartua has always been drawn to Salvador Dali art. Not only as one of the most predominant 20th century artists but also by his hometown proximity to Cadaqués where Paul paints and is inspired a few weeks every year. 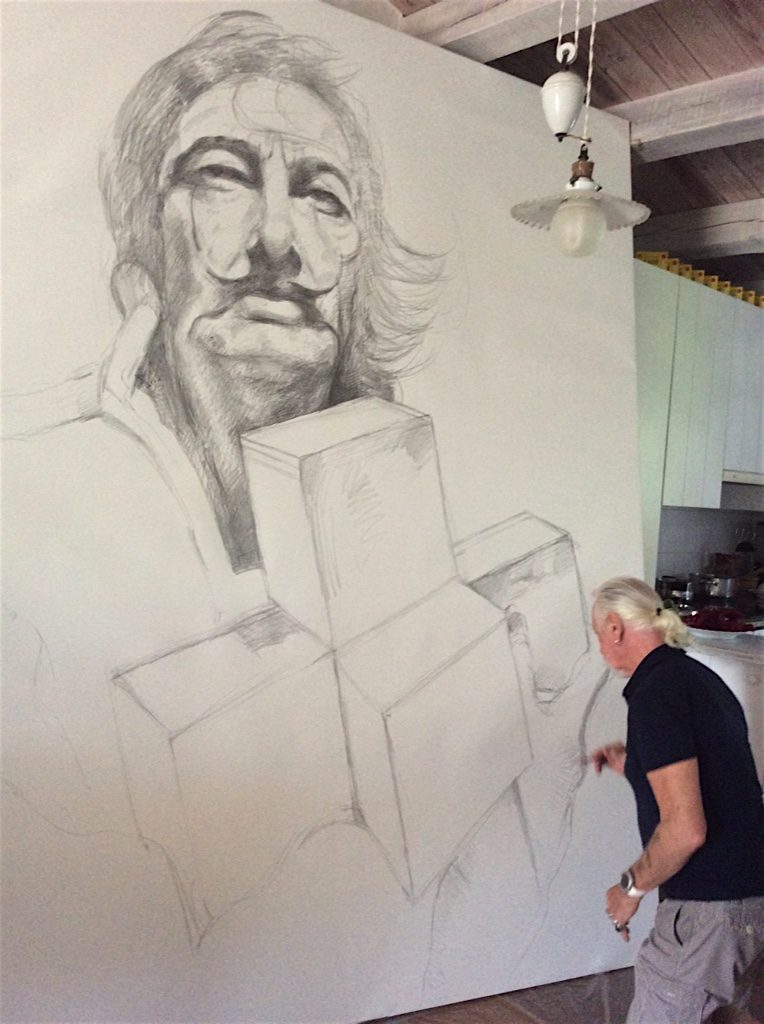 The Cross – 2 x 3 meters, acrylic on canvas. View this painting for sale on This is Art London.

Paul has always been fascinated by Dali’s surrealist portrayal of the “Crucifixion” depicting Christ on a 4D like Cross known as a “polyhedron net of a tesseract”. This is one of his best known paintings from the later periods of his career in 1954.

What draws Paul to this painting is how Dali merges religion and concepts of science together highlighting his belief that they can coexist. “When I came across the photo of Dali holding the cross by Francesc: Catala-Roca taken in 1951, I immediately was inspired to paint this portrait and capture the energy in this image. Using acrylic on canvas as my medium, I wanted it to create a large vibrant portrait bringing the fantastic image to life.

For Paul starting and completing a painting in one single sprint gives him the relaxed fluidity that comes with his art. 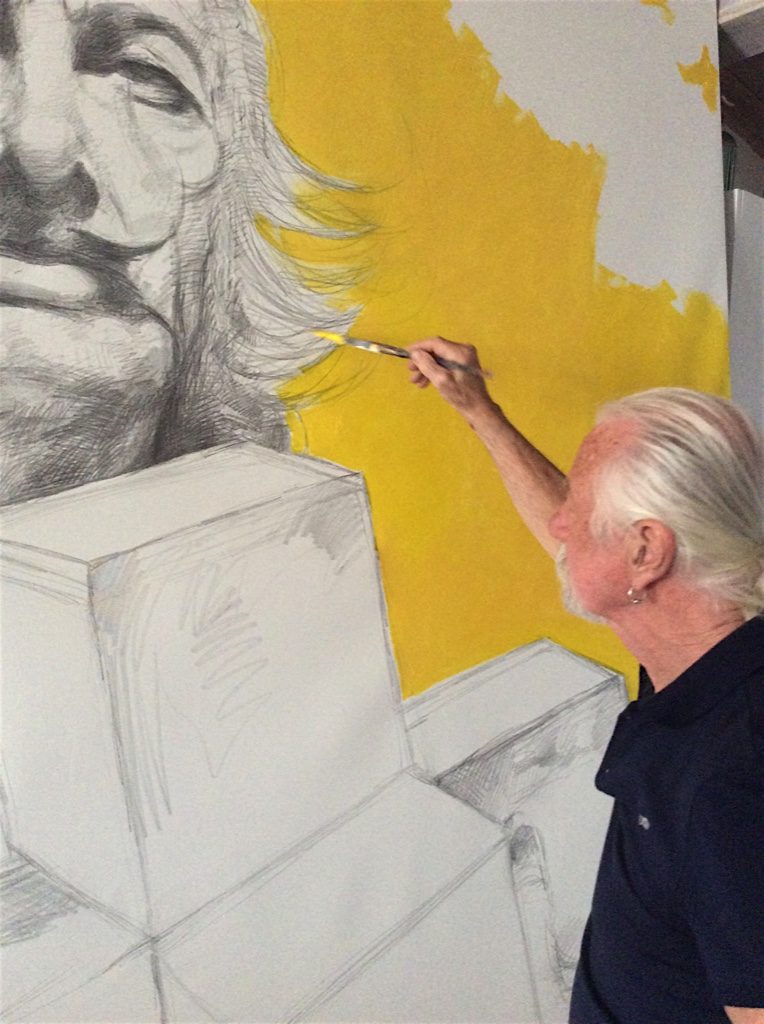 “I love working with large sizes. First I wanted to get the dimensions just right and began by quickly sketching out guidelines for proportions. I then continue by filling in the backdrop to give a sense of size which helps me accentuate the cross to my liking creating the desired dramatic 3D effect. 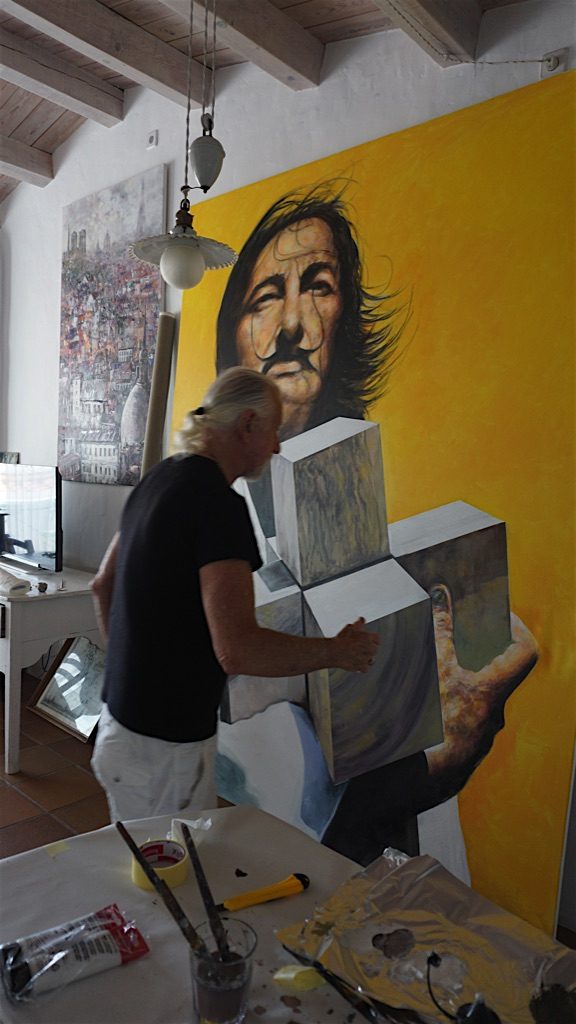 I always enjoy painting this subject matter as it reminds me of how Dali mixed in his passion for science and removing the boundaries they set to his art.  It has an amazing three dimensional effect with the bold and bulky cross, giving Dali the appearance of being strong and powerful, whereby he dominates the cross. 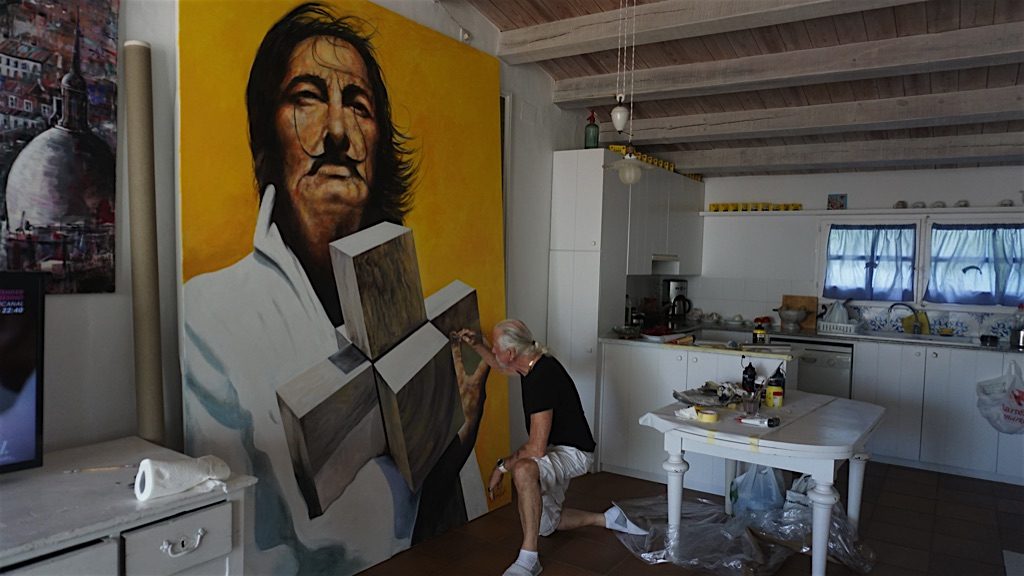 I am always drawn to subject matter that is dynamic, it compels me to paint on a large format, as the subject and Dali himself demand this, particularly with a three dimensional subject giving even more potential to exaggerate the study. Due to my training in Industrial Design I revel in any opportunity to work with perspectives and three dimensional drawings– creating  the Cross was an interesting challenge.” 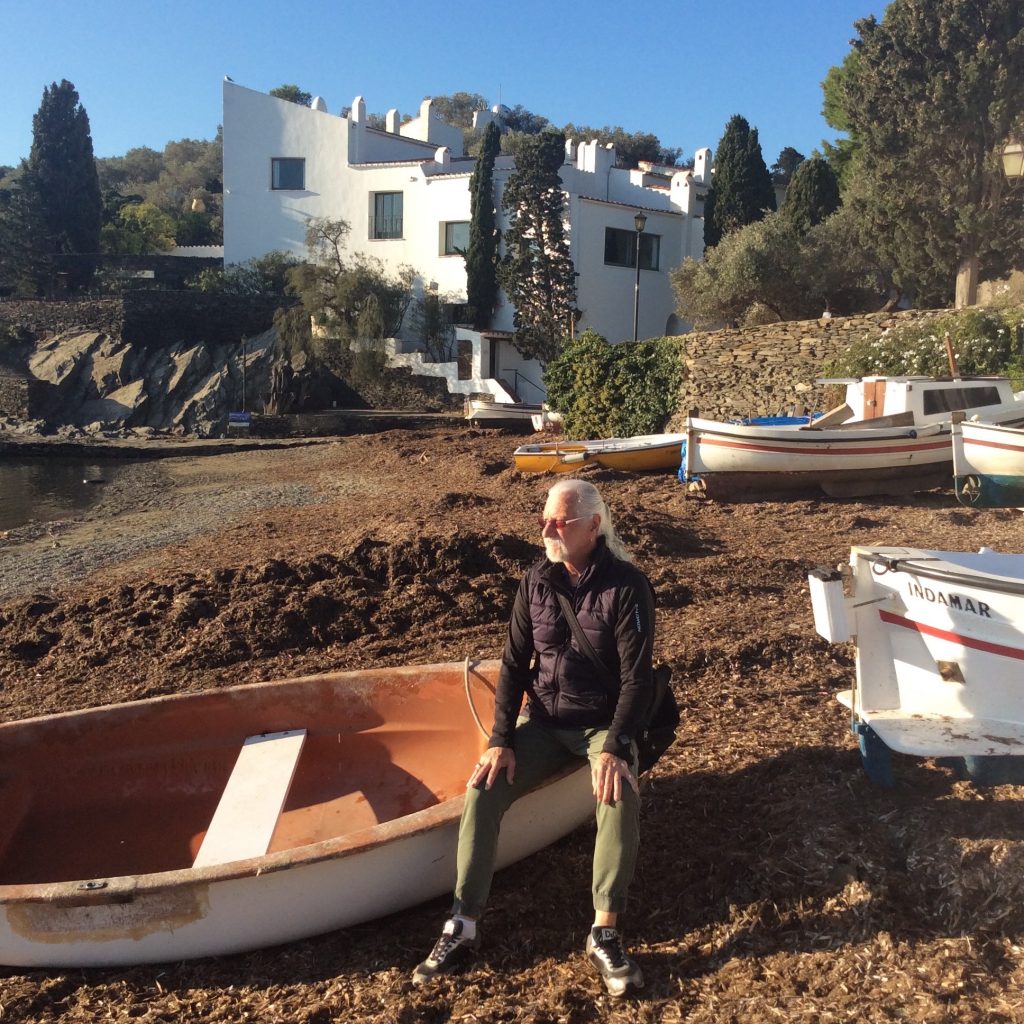 Paul Ygartua in front of Dali’s home in Cadaqués, Spain. This house is open to the public daily, along with his museum in Figueras.

The Salvador Museum is in Figueras, which is about a 30 minute drive from Cadaqués, but Dali and Gala lived in the house just behind Ygartua on the boat, and this is his house where they lived for many years, and they do arrange paid visits daily, as tourists come to see the house which is like a museum inside, with many of his works, etc.

Cadaqués is severed from the plain of the Upper Emporda by a coastal range dominated by the forbidding, maquis-clothed hump of the Peni Mountain, which rises to 613 metres. Despite the twists and turns, and the narrowness of the road, today it only takes about forty minutes to drive here leisurely from Figueres. In the 1800s it was a very different matter and the return journey could not be done in a day. An adequate road connecting the village to Roses, and thence to Figueres, was not built until early in the twentieth century. For Cadaqués, the Land’s End of eastern Spain, the sea was not only its livelihood but its highway in and out. 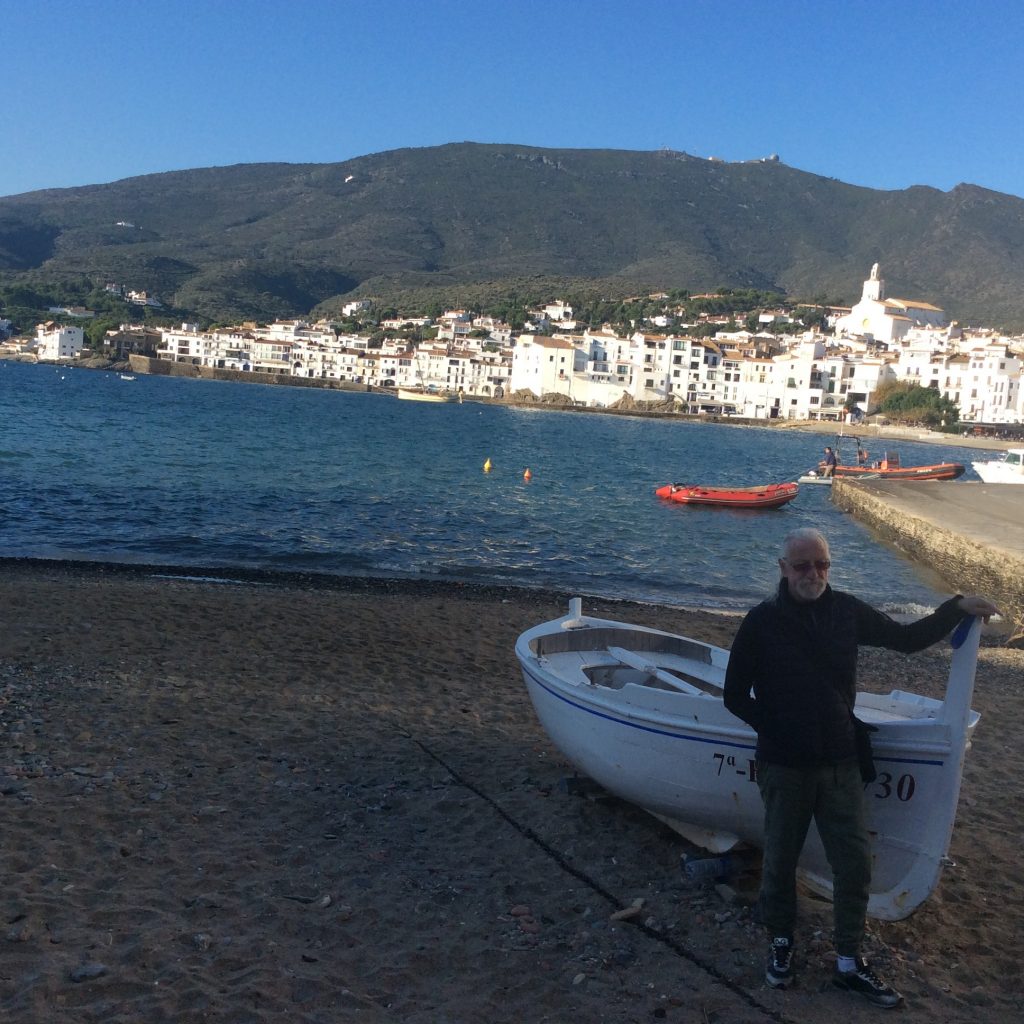 “It fascinates me to not only live in the town where Dali created and lived, but to actually spend time here in Cadaqués is also inspirational and enriching.

It is always a pleasure to work in my studio here in Cadaqués.  Among the towns and villages on the Costa Brava; Cadaqués outstands for its genuineness and singularity. Originally a small fishing village  with  historical records dating back before 814, now one of the most famous towns on the Costa Brava, thanks to the work of Salvador Dali. It fascinates me to not only live in the town where Dali created and lived, but to actually spend time here  in Cadaqués is also inspirational and enriching.

The rugged trails up and down to the center of the town are ancient. I imagine the pirates, which they claim were here, the Egyptians, the Jews, the Greeks, the Romans, they all had their day here – the historical influence is inspirational, everyday feels like you are reliving history when you walk the ancient walkways of Cadaqués.” – Paul Ygartua

Who is Salvador Dali?
Crucifixion (Corpus Hypercubus) is a 1954 oil-on-canvas painting by Salvador Dalí. A nontraditional, surrealist portrayal of the Crucifixion of Jesus, it depicts Christ on the polyhedron net of a tesseract (hypercube). It is one of his best known paintings from the later period of his career.

View this portrait of Salvador Dali.